Do You Know This Robbery Suspect??

Do You Know This Robbery Suspect??

The robbery occurred at approximately 11:15 a.m. on Tuesday, July 02, 2019, at the BB&T Bank located at 10011 Cypresswood Drive in Northwest Harris County, TX.The suspect entered the bank, approached a teller, and handed over a threatening note which demanded cash. He fled the bank on foot with an undisclosed amount of money. No one was physically hurt during the robbery.The robber is described as a white male in his mid to late 20's, having a beard, approximately 5'07" tall, with a skinny build and weighing about 160 pounds. During the robbery, he wore a black hooded sweatshirt, sunglasses, black cap, and grey shorts.Photographs of the bank robbery suspect are attached.Crime Stoppers of Houston is offering up to $5,000 for information leading to the identif ication and arrest of this robber.If you have any information, please call the HCSO Violent Crimes Unit at 713-274-9100, the FBI Houston Field Office at (713) 693-5000, or the Crime Stoppers tip line at 713-222-TIPS (8477). Tips may also be submitted to Crime Stoppers through their website, www.crime-stoppers.org, or the Houston Crime Stoppers mobile phone app which can be downloaded for both iPhone and Android devices. All tipsters remain anonymous. 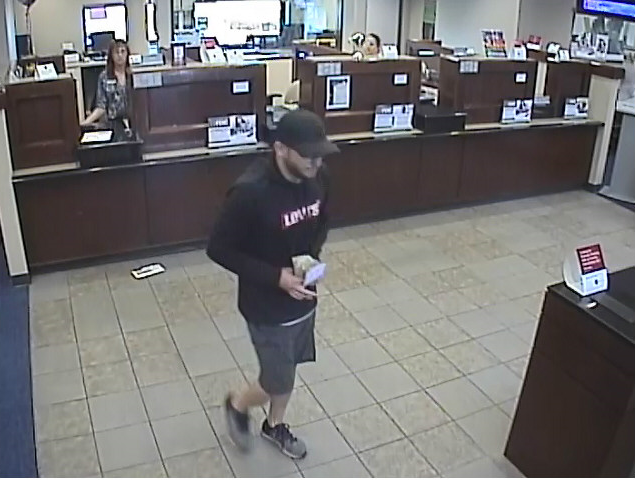