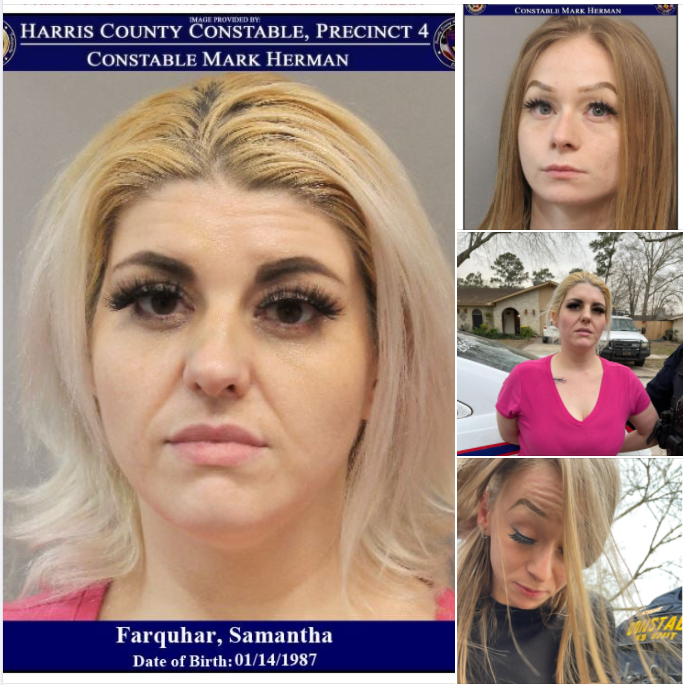 On January 20, 2021, deputies with Constable Mark Herman's Office Special Operations Unit and Canine Division executed an arrest warrant at a residence in the 5800 block of Evening Shadows Lane after receiving information that a suspect wanted for Aggravated Robbery with a Deadly Weapon, Samantha Farquhar was residing at the location.As Constable Deputies made contact at the front door, Samantha Farquhar and a second female attempted to flee out of a back bedroom window where they were quickly detained.During the investigation, Samantha Farquhar falsely identified herself to deputies but her identity was confirmed by fingerprints. The second female was identified as Lacey Dalton who attempted to deceive deputies by stating that Samantha Farquhar was not at the residence and called her by a different name. Additionally, Samantha Farquhar was found to be in possession of 7.52 grams of Cocaine, 3.43 grams of Methamphetamine, a handgun and numerous scales and plastic bags indicative of narcotic sales. "They were both arrested and booked into the Harris County Jail. Samantha Farquhar was charged for the Aggravated Robbery with a Deadly Weapon Warrant and received two new charges for Possession with Intent to Deliver a Controlled Substance. She is being held with No Bond out of the 179th District Court. Lacey Dalton was charged with Hindering Apprehension. Her bond was set at $5,000.00 out of the 183rd District Court." - Constable Mark Herman
Reply
* Reactions disabled on political threads.
What are your thoughts? Log in or sign up to comment Log in » Sign up »
Post a comment »